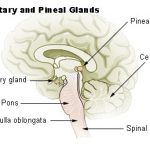 The pineal gland is a small endocrine gland in the brain of animals with backbones. The pineal gland produces melatonin, a serotonin derived hormone which modulates sleep patterns in both circadian and seasonal cycles. The shape and size of the gland make it resemble a pine nut, inferring its name.

René Descartes believed the pineal gland to be the “principal seat of the soul”. Academic philosophy among his contemporaries considered the pineal gland as a neuroanatomical structure without special metaphysical qualities; science studied it as one endocrine gland among many. However, the pineal gland continues to have an exalted status in the realm of pseudoscience. ~ Wikipedia

The pineal gland has a rich supply of adrenergic nerves (neurons sensitive to the adrenal hormone epinephrine) that greatly influence its function. Microscopically, the gland is composed of pinealocytes (rather typical endocrine cells except for extensions that mingle with those of adjacent cells) and supporting cells that are similar to the astrocytes of the brain. In adults, small deposits of calcium often make the pineal body visible on X-rays. (The pineal gland eventually becomes more or less calcified in most people.)

In some lower vertebrates the gland has a well-developed eyelike structure. In others, though not organized as an eye, it functions as a light receptor.

Circulating melatonin levels in vertebrates are derived from pineal melatonin secretion, and their magnitude informs brain regions about environmental light-dark cycles and seasonality, as inferred by changes in the duration of the nocturnal melatonin plateau. Those cues, in turn, help to entrain sleep activity (enhanced by darkness) and reproductive cycle events (increased with more seasonal lighting).

In birds, rodents, and seasonally breeding mammals, pinealectomy (pineal gland removal) impairs reproduction. In those species there are indications that melatonin stimulates the release of gonadotropin-inhibitory hormone, in turn leading to the suppression of gonadotropins (hormones that act on the ovaries or testes), which may explain the disruptive effects on reproduction.

In humans both precocious puberty and delayed puberty have been associated with pineal tumours and cysts. However, the pathogenesis leading to those conditions is unclear, and both mechanical and hormonal factors may be involved. Positive relationships between melatonin secretion and some other hormones have been reported, though pure melatonin-secreting tumours have not been observed. Indeed, in contrast to other endocrine glands, such as the pituitary, adrenal, and thyroid, there are no well-defined pineal hormone-deficiency or hormone-excess syndromes.

The lack of pineal disorders that involve hormone deficiency or hormone excess has been an obstacle to the investigation of putative roles for the gland. Such roles include the possibility that melatonin secretion is an important factor in the induction and maintenance of nocturnal sleep, as suggested by classical studies in night-shift workers.

Relatively little is known about genetic variants that influence melatonin levels and the relationship of those variants to sleep disorders and other circadian pathologies. Nonetheless, melatonin administration has been associated with numerous and diverse effects, including immune responses, cellular changes, and protection against oxidative stress. Those observations stimulated research on the therapeutic potential of melatonin and its analogues, such that certain melatonin receptor agonists (e.g., tasimelteon) have been approved for the treatment of certain sleep-related disorders.