Can military strategy be used as inspiration for cancer research? Yes, it can, at least according to David Gisselsson Nord, a pathologist and cancer researcher at Lund University in Sweden, and Robert Egnell, a strategist at the Swedish Defence University in Stockholm, who recently published an article in the research journal Trends in Cancer.

“There are a great number of similarities between the US Army’s field manual on how to counter insurgencies and the very latest thinking in cancer treatment. Above all, the strategic thinking on countering insurgencies (known as COIN doctrine) helps us to identify opportunities which have been very insufficiently investigated so far”, says David Gisselsson Nord.

A core principle of COIN doctrine is the insight that success is not achieved merely by defeating the enemy; one must address the fundamental causes of the insurgency, thereby focusing on winning the trust and loyalty of the local population.

“A British field marshal, Sir Robert Templer, who was the British Empire’s High Commissioner in Malaysia, expressed it this way: ‘The answer [to defeating the insurgents] lies not in pouring more troops into the jungle, but rests in the hearts and minds of the people’,” explains Robert Egnell.A summarising tactical brief for this approach is used in combating insurrections: Shape – Clear – Hold – Build. First, one must investigate the type of environment in which the rebellion has occurred and its social driving forces. The aim is to be able to shape the environment so that it hinders the insurgency rather than fostering it. Then one eradicates visible militant groups through massive military intervention (clear), so as to temporarily take over responsibility for the nation (hold). Finally, one builds the country up so that it is able to self-govern again, in a way that avoids a repeat of the shortcomings that initially led to the insurgency (build).

“Traditionally, we dedicate much of cancer treatment to clear – i.e. we use as many resources as we can on surgery, chemotherapy and radiation, in an extremely aggressive manner”, continues David Gisselsson Nord.

The emergence of guerrillas and the growth of a tumour have many similarities – they both develop slowly over many years in a way that is almost impossible to predict. Cancer tumours are dynamic networks of healthy and diseased cells; treatment with chemotherapy makes it even more complex and difficult to understand what happens when a tumour initially responds to treatment, only to recur later on in a form that is resistant to treatment.

“If you knock out the central power in a country, you create a vacuum in which rebels and guerrilla soldiers have an opportunity to seize power. The same applies when treatment succeeds in knocking out the cells which dominate a tumour, only to create space for other cancer cells to develop. Currently, we simply know too little about what allows certain cancer cells to survive and cause relapses”, says Robert Egnell.

Instead, for some patient groups, we should perhaps focus more on hold – i.e. keeping the cancer in check, thereby dealing with a more stable disease which responds to treatment. All cancer cells do not necessarily behave in the same way as the dominant group within a tumour, which is often the reason why problems arise when the cell combination changes. This allows new types of cells to grow, like a guerrilla movement. David Gisselsson Nord explains:

“We cancer researchers should perhaps spend more time finding new strategies to shrink tumours so that patients can survive with a high quality of life despite their cancer. One way of achieving this, in theory, is to treat the tumour in such a way as to maintain the biodiversity of the main tumour, so that new types of cancer cells which are untreatable do not take over. Such strategies have scarcely been investigated.”

Most oncological treatments are static and rest on scarce clinical and diagnostic data, sometimes with some genetic information. This presumes that the tumour cells will barely change in a patient, but it is increasingly clear that, in most forms of cancer, the tumour’s genetic code changes over time. In order to keep up with the unpredictable growth of the insurrection, the warfare must be intelligence-led and flexible. Fighting a guerrilla exclusively with military means, or conducting civil activities which are not specifically adapted to the surrounding political and social context, is doomed to fail according to Robert Egnell. Physicians need to become better at the clinical “intelligence work” so that medication can be adapted to changes in the tumour’s properties, because a tactic that works for one patient does not necessarily work for another. Increasing numbers of studies show that physicians need to repeat biopsies and double-check biomarkers to enable continuous modification of treatment and prevent the cancer from becoming resistant.

“More research resources are needed to investigate life-prolonging measures in cases where the cancer has already spread. It is important to emphasise, however, that this does not, by any means, apply to all cancer cases and one must start by researching the field to determine whether the theory can be converted into clinical practice. From a military strategy perspective, it would be equally interesting to reverse the process and see what medical research and treatment could teach us”, concludes David Gisselsson Nord. 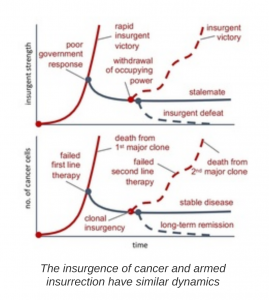