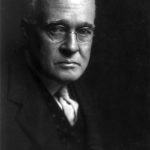 Horace Fletcher (1849–1919) was an American health food enthusiast of the Victorian era who earned the nickname “The Great Masticator”, by arguing that food should be chewed about 100 times per minute before being swallowed: “Nature will castigate those who don’t masticate”. He made elaborate justifications for his claim.

Fletcher and his followers recited and followed his instructions religiously, even claiming that liquids, too, had to be chewed in order to be properly mixed with saliva. Fletcher argued that his mastication method will increase the amount of strength a person could have while actually decreasing the amount of food that he consumed. Fletcher promised that “Fletcherizing”, as it became known, would turn “a pitiable glutton into an intelligent epicurean.”

EPICURUS ~ Wikipedia ~ For Epicurus, the purpose of philosophy was to attain the happy, tranquil life, characterized by ataraxia—peace and freedom from fear—and aponia—the absence of pain—and by living a self-sufficient life surrounded by friends. He taught that the root of all human neurosis was death denial, and the tendency for human beings to assume that death will be horrific and painful, which he claimed causes unnecessary anxiety, selfish self-protective behaviors, and hypocrisy. According to Epicurus, death is the end of both the body and the soul and therefore should not be feared. He also taught that the gods neither reward nor punish humans; that the universe is infinite and eternal; and that occurrences in the natural world are ultimately the result of atoms moving and interacting in empty space.