Fungi comprise a diverse group of organisms that cannot produce its own food(heterotrophic) and typically feed on dead organic matter(saprozoic). In addition to the well-known macroscopic fungi (such as mushrooms and molds), many unicellular yeasts and spores of macroscopic fungi are microscopic. For this reason, fungi are included within the field of microbiology.

Fungi are important to humans in a variety of ways. Both microscopic and macroscopic fungi have medical relevance, with some pathogenic species that can cause mycoses (illnesses caused by fungi). Some pathogenic fungi are opportunistic, meaning that they mainly cause infections when the host’s immune defenses are compromised and do not normally cause illness in healthy individuals. Fungi are important in other ways. They act as decomposers in the environment, and they are critical for the production of certain foods such as cheeses. Fungi are also major sources of antibiotics, such as penicillin from the fungus Penicillium. 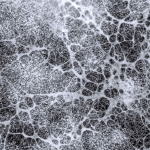 Fungi have well-defined characteristics that set them apart from other organisms. Most multicellular fungal bodies, commonly called molds, are made up of filaments called hyphae. Hyphae can form a tangled network called a mycelium through which the fungus absorbs nutrients, and form the thallus (body) of fleshy fungi. 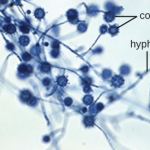 In contrast to molds, yeasts are unicellular fungi. The budding yeasts reproduce asexually by budding off a smaller daughter cell; the resulting cells may sometimes stick together as a short chain or pseudohypha. Candida albicans is a common yeast that forms pseudohyphae; it is associated with various infections in humans, including vaginal yeast infections, oral thrush, and candidiasis of the skin.

Some fungi are dimorphic, having more than one appearance during their life cycle. These dimorphic fungi may be able to appear as yeasts or molds, which can be important for infectivity. They are capable of changing their appearance in response to environmental changes such as nutrient availability or fluctuations in temperature, growing as a mold, for example, at 25 °C (77 °F), and as yeast cells at 37 °C (98.6 °F). This ability helps dimorphic fungi to survive in diverse environments. Histoplasma Capsulatum, the pathogen that causes histoplasmosis, a lung infection, is an example of a dimorphic fungus.

Fungal life cycles are unique and complex. Fungi reproduce sexually either through cross- or self-fertilization. Haploid fungi form hyphae that have gametes at the tips. Two different mating types (represented as “+ type” and “– type”) are involved. The cytoplasms of the + and – type gametes fuse (in an event called plasmogamy), producing a cell with two distinct nuclei (a dikaryotic cell). Later, the nuclei fuse (in an event called karyogamy) to create a diploid zygote. The zygote undergoes meiosis to form spores that germinate to start the haploid stage, which eventually creates more haploid mycelia. Depending on the taxonomic group, these sexually produced spores are known as zygospores (in Zygomycota), ascospores (in Ascomycota), or basidiospores (in Basidiomycota).

Fungi may also exhibit asexual reproduction by mitosis, mitosis with budding, fragmentation of hyphae, and formation of asexual spores by mitosis. These spores are specialized cells that, depending on the organism, may have unique characteristics for survival, reproduction, and dispersal. Fungi exhibit several types of asexual spores and these can be important in classification. 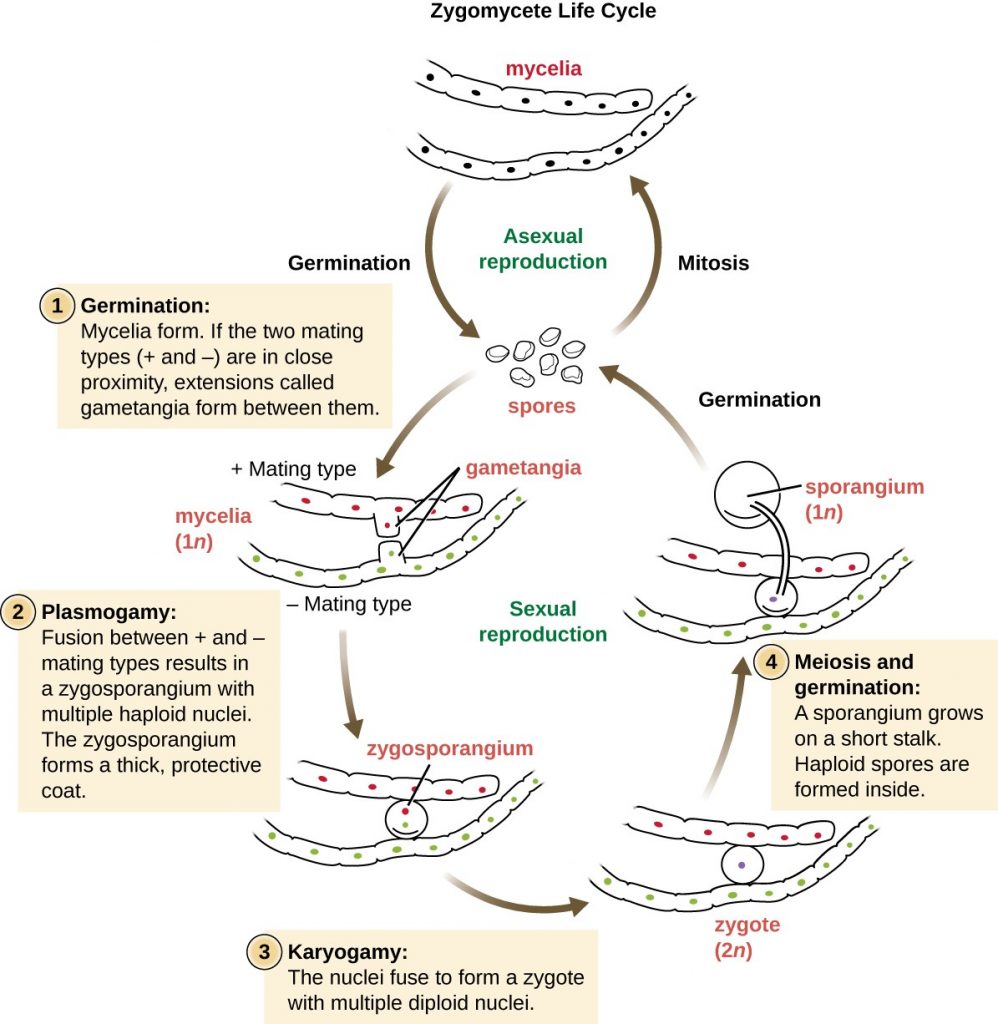 The fungi are very diverse, comprising seven major groups. Not all of the seven groups contain pathogens. Some of these groups are generally associated with plants and include plant pathogens. For example, Urediniomycetes and Ustilagomycetes include the plant rusts and smuts, respectively. These form reddish or dark masses, respectively, on plants as rusts (red) or smuts (dark). Some species have substantial economic impact because of their ability to reduce crop yields. Glomeromycota includes the mycorrhizal fungi, important symbionts with plant roots that can promote plant growth by acting like an extended root system.

The Glomeromycota are obligate symbionts, meaning that they can only survive when associated with plant roots; the fungi receive carbohydrates from the plant and the plant benefits from the increased ability to take up nutrients and minerals from the soil. The Chytridiomycetes (chytrids) are small fungi, but are extremely ecologically important. Chytrids are generally aquatic and have flagellated, motile gametes; specific types are implicated in amphibian declines around the world. Because of their medical importance, we will focus on Zygomycota, Ascomycota, Basidiomycota, and Microsporidia, summarizes the characteristics of these medically important groups of fungi.

The Zygomycota (zygomycetes) are mainly saprophytes with coenocytic hyphae and haploid nuclei. They use sporangiospores for asexual reproduction. The group name comes from the zygospores that they use for sexual reproduction, which have hard walls formed from the fusion of reproductive cells from two individuals. Zygomycetes are important for food science and as crop pathogens. One example is Rhizopus stolonifer, an important bread mold that also causes rice seedling blight. Mucor is a genus of fungi that can potentially cause necrotizing infections in humans, although most species are intolerant of temperatures found in mammalian bodies.

The Ascomycota include fungi that are used as food (edible mushrooms, morels, and truffles), others that are common causes of food spoilage (bread molds and plant pathogens), and still others that are human pathogens. Ascomycota may have septate hyphae and cup-shaped fruiting bodies called ascocarps. Some genera of Ascomycota use sexually produced ascospores as well as asexual spores called conidia, but sexual phases have not been discovered or described for others. Some produce an ascus containing ascospores within an ascocarp.

Examples of the Ascomycota include several bread molds and minor pathogens, as well as species capable of causing more serious mycoses. Species in the genus Aspergillus are important causes of allergy and infection, and are useful in research and in the production of certain fermented alcoholic beverages such as

Japanese sake. The fungus Aspergillus flavus, a contaminant of nuts and stored grains, produces an aflatoxin that is both a toxin and the most potent known natural carcinogen. Neurospora crassa is of particular use in genetics research because the spores produced by meiosis are kept inside the ascus in a row that reflects the cell divisions that produced them, giving a direct view of segregation and assortment of genes. Penicillium produces the antibiotic penicillin.

Examples of the Ascomycota include several bread molds and minor pathogens, as well as species capable of causing more serious mycoses. Species in the genus Aspergillus are important causes of allergy and infection, and are useful in research and in the production of certain fermented alcoholic beverages such as Japanese sake. The fungus Aspergillus flavus, a contaminant of nuts and stored grains, produces an aflatoxin that is both a toxin and the most potent known natural carcinogen. Neurospora crassa is of particular use in genetics research because the spores produced by meiosis are kept inside the ascus in a row that reflects the cell divisions that produced them, giving a direct view of segregation and assortment of genes. Penicillium produces the antibiotic penicillin. 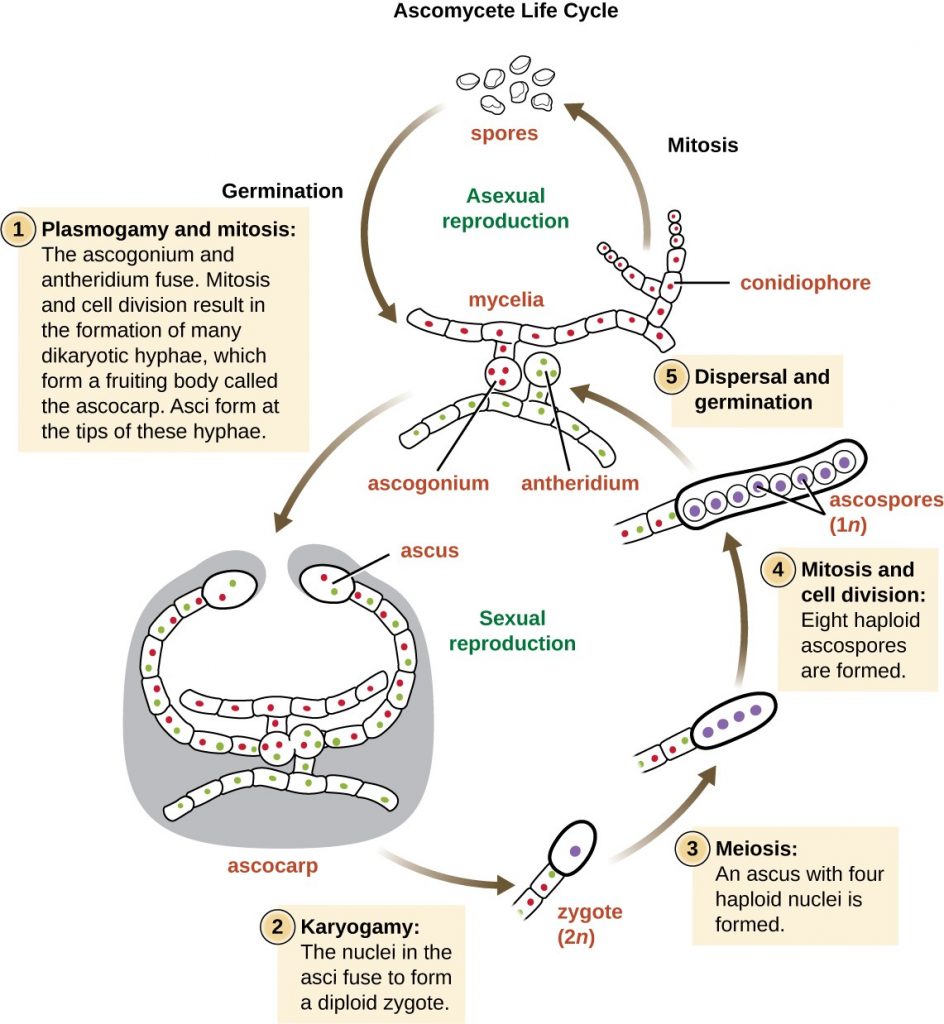 The Basidiomycota (basidiomycetes) are fungi that have basidia (club-shaped structures) that produce basidiospores (spores produced through budding) within fruiting bodies called basidiocarps. They are important as decomposers and as food. This group includes rusts, stinkhorns, puffballs, and mushrooms. Several species are of particular importance. Cryptococcus neoformans, a fungus commonly found as a yeast in the environment, can cause serious lung infections when inhaled by individuals with weakened immune systems. The edible meadow mushroom, Agricus campestris, is a basidiomycete, as is the poisonous mushroom Amanitaphalloides, known as the death cap. The deadly toxins produced by A. phalloides have been used to study transcription. 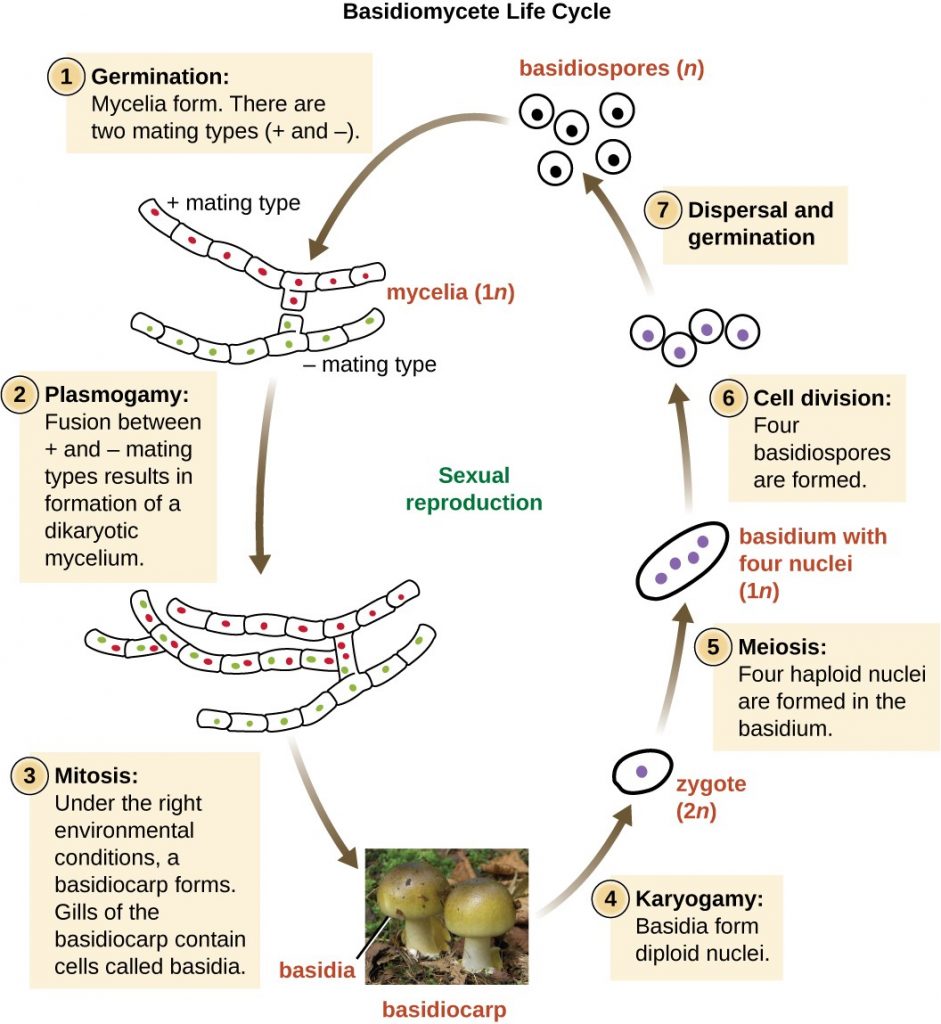 Finally, the Microsporidia are unicellular fungi that are obligate intracellular parasites. They lack mitochondria, peroxisomes, and centrioles, but their spores release a unique polar tubule that pierces the host cell membrane to allow the fungus to gain entry into the cell. A number of microsporidia are human pathogens, and infections with microsporidia are called microsporidiosis. One pathogenic species is Enterocystozoan bieneusi, which can cause symptoms such as diarrhea, cholecystitis (inflammation of the gall bladder), and in rare cases, respiratory illness.